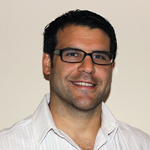 “2020 software makes the whole process of designing, drawing, pricing and presenting to the client extremely easy and fast.”—Agustin Caro

Agustin was born and raised in Argentina. He graduated from the Universidad Catolica de Salta (Catholic University of Salta) as an Architect. “I was always interested in the design aspect of the industry and decided not to follow in my family’s footsteps to become an engineer but rather to pursue architecture.” In his third year, Agustin participated in a Student Exchange Summer Work program that brought him to the United States. His first job was holding a welcome sign at a cruise terminal in Ft. Lauderdale as he did not speak any English. He met his wife while playing rugby and they traveled for a year throughout Asia before settling in Fort Lauderdale.

Before coming to M. Hanson & Company, Inc., South Florida’s full service office furnishings dealership, in 2013, Agustin trained as a first responder, an EMT and attended college for nursing. For four years, he has been an integral part of the Studio M Team. In his free time, Agustin enjoys spending time with his wife, their three children and their dog, and he stills playing rugby.

Agustin was first introduced to 2020 Office Solutions when he started working at M. Hanson & Company, Inc. He uses 2020 Cap, 2020 Worksheet and 2020 Visual Impression for the majority of his work. “2020 software makes the whole process of designing, drawing, pricing and presenting to the client extremely easy and fast,” states Agustin. “Being able to select different manufacturers’ products and insert them in a project design which we can provide to the client is a huge benefit to help streamline the sales process. Working with 2020, in my experience, is very pleasant and easy. They are always willing to help and also provide live training as well as recorded training for our convenience.”

Agustin recently won a 2020 Inspiration Award for his design and 2020 Visual Impression rendering!